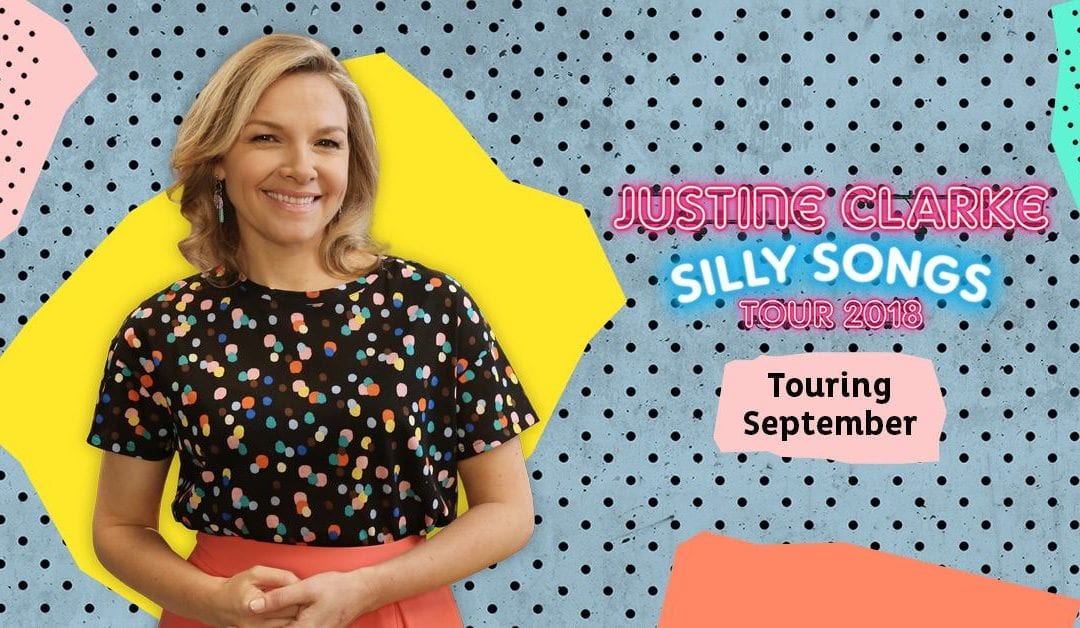 Justine Clarke’s 2018 “Silly Songs Tour” is just around the corner with shows in Sydney, Melbourne, Canberra, Perth, Brisbane and Adelaide starting this September!

If you love Justine’s catchy tunes as much as we do, you might be interested to find out a bit more about her and her music. We were lucky enough to meet up with the lovely Justine Clarke and ask her some questions about her music and childhood!

Did you grow up in a musical household? When did your love of music begin?

Nobody played an instrument but there was a lot of music appreciation through singing and dancing. Dance has always been an expression of my love of music and my parents used tell me I sang before I could speak.

Did you have a favourite silly song or nursery rhyme that you loved when you were a kid?

The “one-eyed one-armed flying purple people eater” was a favourite and my mum used to sing me a silly song that went like this – “Mares eat oats and does eat oats and little lambs eat ivy, a kid’ll eat ivy too wouldn’t you?” – try saying that fast! It’s fun.

Also, “How much is that doggy in the window” and “Supercalifragilisticexpialidocious”

What is your favourite song to sing along to with your kids – in the car on the way to school or rocking out in the lounge room?

It has changed many times over the years but my eight year old is obsessed with any song by Fitz and the Tantrums at the moment and one in particular called “Hands Clap”. We all liked Sia’s song “Clap Your Hands” too, such a great kids song.

What is your favourite thing about being on stage?

Creating good feelings with everyone in the room.

I played the guitar since I was 10 and I’ve just taken up lessons again, I’m teaching myself how to play the ukulele but I’ve always wanted to play the trumpet, I have one in my cupboard, rusting!

What is your favourite karaoke song and why?

Islands in the stream because it means I need a Kenny Rogers and I love a duet!!

If you could sing a duet with anyone (dead or alive) who would it be and why?

Haha! Kenny! No, it would be Frank Sinatra because I’ve been singing along with him since I was five.

What are you looking forward to most about the Silly Songs tour?

Hearing the audience sing with me!

Tickets to the upcoming tour are on sale now. Click here for more details and tour dates.